I looked many places to find tutorials on the Half Chevron Stitch.  It is not a well documented stitch.  If anyone has any info on how this stitch was developed I would love to know about it.

I did, however, see numerous blog posts about the half chevron.  Most were in reference to the TAST challenges.  Interesting.

My approach to this stitch was to consider additional “notions of attachment.”  One person has commented on my play on words.  I’m not sure others understand the intended stitching pun!  I’m sure all stitchers understand sewing notions and things we use for attaching to fabric.  But I was also alluding to notions meaning ideas and the attachments I meant were the attachments that impede spiritual progress in Buddhism where attachments are considered the root of all suffering in life.

For years, indeed decades, stitching has been a meditation for me.  It began when the only stitching I did was counted cross stitch.  I came to see that each stitch was the equivalent of one breath.  One half the cross is a breath in.  Completing the cross is the exhalation.  Maneuvering the thread and positioning of the hand and work is the space between breaths.  And in this way, each embroidered piece is ALIVE!  Then when you give that piece away, you are giving a very real part of your essence.

Part of traveling a Buddhist path is to look carefully for any impediments along the way to reducing suffering in the world and ultimately reaching a state of enlightenment.  There are so many ways of accomplishing this.  One of the things that is a chronic problem for me on the path is attachments, things that keep me stuck in one place, things that make me feel too strongly in one direction.  I have been successful to a large extent in giving up my emotional attachments to “things.”  For example, when the box holding my bone china collection fell in the storage unit last summer, Jeff apologized for a week as he had heard the tinkle of breakage when he grabbed the box.  I had a moment of profound sadness.  But only a moment.  I felt the feeling and then it was over.  Jeff was more upset than I was.  This summer we will open that box and toss out what is pointless to hang on to as we continue to downsize.  It will be work.  It will be a job.  That’s all.  No drama.

When traveling North and I thought that we were going to lose our truck and our lifestyle.  I was devastated.  Primarily thinking about the possibility of moving into a situation that would not allow me to keep my dogs.  I am INCREDIBLY attached to my dogs.  It is an extreme emotional response.  This is an Attachment that stands between me a living a life of Nonattachment according to Buddhist principles.  It is something I struggle with every day. 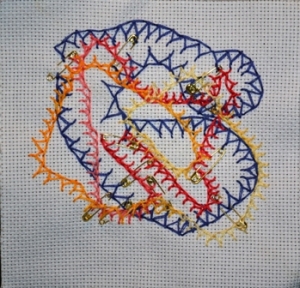 Hence my TAST 2012 Attachment Quilt block that I have named Pinned, like pinned to the wall, pinned down. I began with the notion (and the idea).  Would it be snaps or pins?  With the half chevron stitch I decided safety pins would be the better choice.  After all the chevrons are spikey like the pins.  I tossed the pins and let them sit where they landed on my sketch pad within the six-inch square.  I traced the heads of the pins to capture the orientation.

Outline of how safety pins fell into place

Following the diagram, I attached the safety pins to the six-inch square of Aida cloth (14 count.)

Okay, now what?!  Color.  I decided to go with some approximation of primary colors since the attachments I have been meditating on are very basic, primal if you will.  Each of the three colors would follow a different path and end up where it began, the danger of all unexamined attachments.  See how messy it can get!  And those half chevrons, they look so prickly. 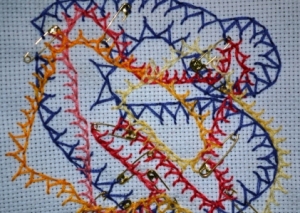 Does any of this make sense to you?  Does it resonate with your connection to stitching?  Does stitching help you think or problem solve?  Or pray?

7 thoughts on “Half Chevron Stitch, TAST Challenge, and the Meditation Continues”