It’s been a while since I’ve done any Take A Stitch Tuesday stitching.  I’ve been designing my flag for the Prayer Flag Installation next month.  And working on a Christmas project for my youngest great-niece (a Shepherd’s Bush Stocking!)  I’ve determined it will take a minimum of 175 hours to complete this project for her.  I’ve never figured out my time in a project before, always just done an approximation at the end.    You should try to calculate your stitch per minute some time.  Your stitching will take on a whole new value for you!  You will be awed by yourself.  AND SHOULD BE!

While I have not stitched Sharon Boggon’s TAST selection for this week, the Pekinese Stitch, I have stitched it before.  And here it is: 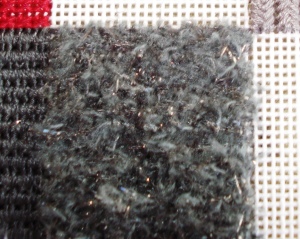 While I was a member of the cyber chapter of the American Needlepoint Guild, I participated in the project to celebrate ANG’s 40th (or Ruby) Anniversary.  The final, framed four panel piece will be auctioned off at the National Conference in Philadelphia later this month.  The project piece was called Ruby Ribbon and was based upon a ribbon patterned quilt block, something like  Celtic knotwork.

One quarter of the quilt block is represented in each of four panels to make a whole block when appropriately arranged.  (I’d show you the block but can’t due to copyright issues.)  Each of the four panels was divided into 144 squares (12×12 grid) about 1.5 inches each.  Participants were told what value of what color to use in each block.  Then it was up to each stitcher to decide what stitch to do (there were to be no duplicate stitches!) and what thread to accomplish the goal.  The colors were different values of red, white, grey, and black.  It was kind of nice because you could sign up for a block based upon what threads you had available in your stash so it would not be cost prohibitive to participate in the project. Last I heard, CyberPointers was working on compiling directions for the piece to be sold as a fund raiser for the group.  Keep an eye out on their web site store page to see the completed piece and to get the pattern if you like.

My Pekinese block was supposed to be a Dark Grey, akin to DMC 413.  So I just used DMC 413 for the backstitching.  Then I used Rainbow Gallery’s Fuzzy Stuff in #19 for the lacing.  It gave an incredible texture, fluffy and soft.  Here are a couple photos of the block in context with several other blocks I stitched near the Pekinese square to give you an idea of how textures and shades worked together.

I really enjoyed the effect of the stitch, but using the Fuzzy Stuff was a bit of a challenge.  I would, however, do it again.  This was a great choice for Santa’s beard or stuffed animal representations or animal fur.  I look forward to using it some more in some of the Buddhist images I’ve been sketching on muslin to embroider.

I wonder?  Is anyone else as far behind in TAST as I am?  I got hung up way back on the buttonhole wheel.  I’ll finish it, I promise!  It’s pretty bad when a stitching sample becomes a UFO!