About six months ago I opened my big mouth and said, “Papa will be my birthday present to myself.  I will start Papa by then or on my birthday.”  Well my birthday is in just a couple days.  And I’ve been getting ready!

I purchased Papa probably four years ago when I discovered Sabine Taterra-Gundacker’s  website “Alte-Mustertücher-nachgestickt.”  Since then I have spent hours and hours looking at the patterns and at the gallery of Sabine’s works and collection.  I personally think everyone who stitches should have one of Sabine’s patterns in his or her repertoire.  Personally, I want them all!

Where do the ideas for these patterns come from?  Sabine finds interesting samplers in museums and in private collections.  She then sets to recreating the original works, documenting threads she uses, trying to match to the original as much as possible.  She includes the errors as well as the beauty and the history, counting every old thread.  I have come to respect her skill even more having been working on the Martha Stones Sampler.  I struggle with “do I correct the spelling or leave it as is?”  I’m leaving it.

Another of my favorites is Erna Schuppelius.  I love how Sabine’s photos included the finishing done on this piece and plan to add the crochet border and ribbon trim to mine.  The alphabet is charming and I will use it in work that I may design myself or for personalizing other works because I love it so.

I have learned so much about samplers from perusing Sabine’s online shop.  And I have come to love samplers from a variety of cultures and can even now begin to identify origins when seeing an unlabeled sampler.  I have several other patterns in queue from Sabine and another that I have started that is purely a labor of love.  (IFAKHS 1817)

Before I seek your input on my color choices for Papa, let me show you how Sabine packages her products for you.  It’s like getting a birthday present in the mail when you open it. 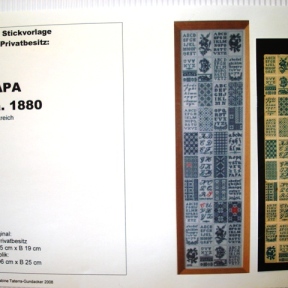 Your first glimpse of the magic within!

Turn it around and you seen your pattern tied together with pretty ribbon, safe in a snapped plastic envelope. 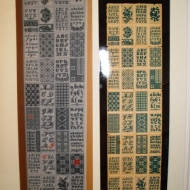 Original sampler and a completed reproduction 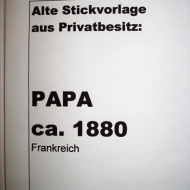 Now here is my dilemma.  I have the fabric it’s a 32ct Wexford linen in blue with grey and charcoal markings.  You’ll see it in the photo gallery following.  I had chosen Threadworx Deep Blue Sea to outline the “pages” of the pattern and Crescent Colours Lobster Claw to do the pattern design using the Threadworx for any accents.

I’ve been testing the Lobster Claw against the fabric in a blackwork SAL.  It’s not bad.  The problem is Jeff hates orange.  It’s not absolutely important that I avoid orange, but I do think he is more likely to help me frame and hang it, it the colors are pleasing to him, too!  And I don’t want to give this one away.  After all it’s a birthday present to me!

Jeff like brown.  He love the colors in my Quaker Virtues.  He has suggested a reddish brown, not too red.  I found a currant color that he likes.  I like it too.  But how will it look on the fabric?  I don’t want to have to wait to get the thread.  That means I’d have to start after my birthday has passed.  And then there is the question of what color should I use for the outlining?  I think the darker blue will be too much dark.  I thought about using the Lobster Claw.  But I don’t know.

What do you think?  Check these pics out and let me know what you think. 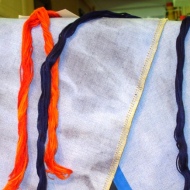 The fabric with Deep Blue Sea and Lobster Claw against it.

A closer shot of the chosen thread and fabric

Up to part 2 so far. Check out http://ohsewtempting.wordpress.com 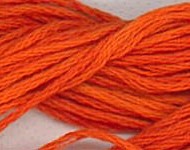